Taking the pulse of flies 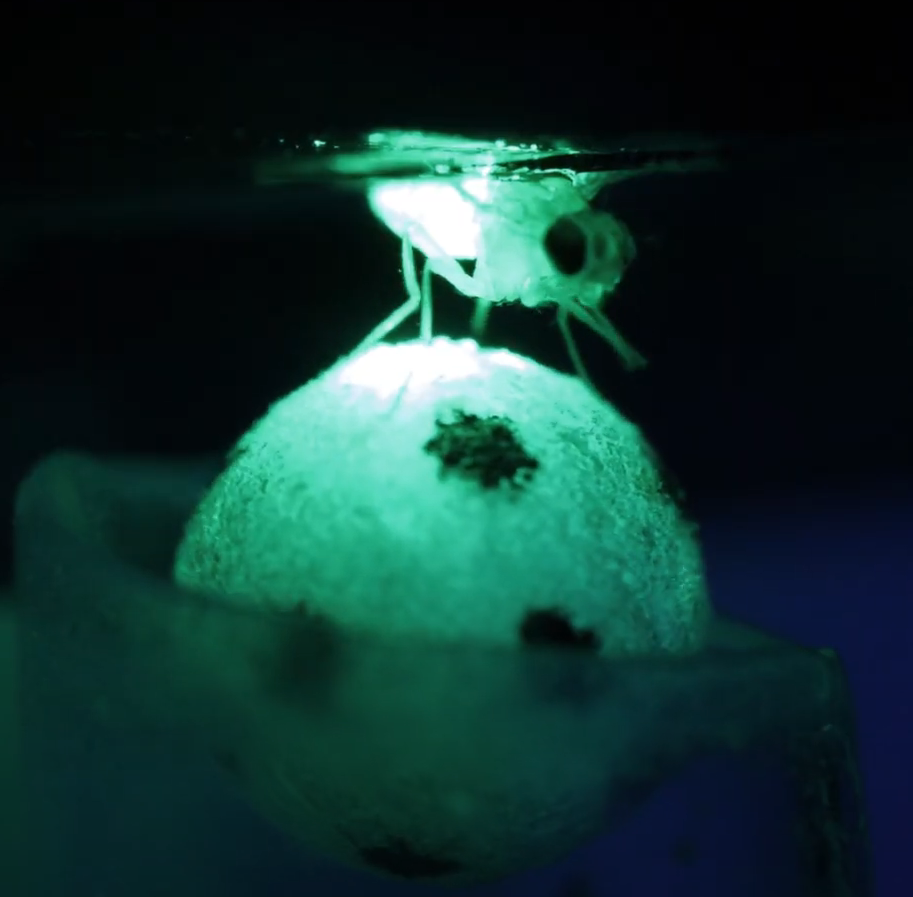 The sound of an accelerating heartbeat can instantly send chills down your spine. You know that sound means trouble. We are so accustomed to the way our hearts seem to continuously mirror how we feel that we can easily imagine different hearts racing, aching or skipping a beat.

But do the hearts of other animals actually follow the same rules when in danger? When it comes to our fellow vertebrates – frogs, cats, antelope – the answer has been long-known to be “yes”. But what about insects?

According to a study by scientists at the Champalimaud Centre for the Unknown in Lisbon, Portugal, which was published in the journal Current Biology, the hearts of fruit flies respond to danger in very much the same way human hearts do.

“We were quite surprised by this result”, recalls Marta Moita, the neuroscientist that led the project. “We know that when vertebrates face a threat, their autonomic nervous system kicks into action, generating the changes in cardiac activity that we are all familiar with. However, this system doesn’t exist in insects, and so it was unclear whether they would exhibit similar cardiac alterations.”

A change of heart

The team zoomed in on the fly’s heart – a minuscule structure made up of two single rows of cells. The researchers followed the heart’s activity through the fly’s transparent exoskeleton while it was walking about by lighting up the heart’s cells with fluorescent molecules. Occasionally, a dark expanding circle appeared on a large screen in front of the fly, mimicking an approaching threat.

“Amazingly, just like in humans, the fly’s heart changed its activity depending on which defence response is assumed. If the fly decided to escape, the heart accelerated, but if the fly froze in place for a sustained period of time, its heart slowed down”, Barrios recounts.

“This finding is very intriguing”, Moita adds. “Since flies don’t have an autonomic nervous system, it means there’s another mechanism at play here. The question is whether there’s an autonomic-nervous-system-like structure that we are not aware of, or is there an entirely different mechanism yet to be discovered”.

Remarkably, this unexpected result was only the first in a series of revelations. The next happened when the team examined the heart’s activity in more detail.

“The structure of the fly’s heart is very different from ours: it’s just a single tube”, Barrios explains. “And since its body is essentially divided into two sealed compartments, the heart alternates pumping in two directions.”

The team tested whether the direction of pumping also changed depending on the fly’s defensive response, and discovered that in both cases – escape and freezing – the heart was pumping more actively towards the front section of the fly.

“Pumping more nutrients into the front section while escaping makes sense. This is where the brain, legs and wings are located, so that’s where the action is. But we didn’t expect to see this while the fly was freezing”, says Barrios.

According to the researchers, freezing is considered an energy-saving behaviour. Indeed, the slowing down of the heart indicates just that. But then, what was the reason the heart was pumping more actively towards the front? The results of this next series of experiments ended up undermining yet another widely held scientific theory.

“We suspected it meant that even though it was freezing, the fly was getting ready for action”, Moita explains. “And that it was consuming energy to maintain this state of preparedness”.

“This finding refutes the generally held belief that freezing is a passive, energy-saving behavioural state”, Moita argues. “Instead, it suggests that freezing is a state of active preparedness. Now, the question is – what is the fly preparing for? What is the range of actions that may follow freezing, and how is the choice between actions made by the brain?”

These questions join a string of new research avenues raised by this study. One of the most pressing is identifying the neural structure that controls cardiac responses to danger in flies, and deciphering how it works.

“Since flies and humans share many genes, the hearts of flies are commonly used to study various aspects of cardiology, particularly relating to disease”, Barrios points out. “However, little attention has been directed towards how the fly’s heart responds to danger.”

“Now that we’ve demonstrated this new commonality, we can move forward to investigate how it happens. Eventually, we hope that insight gained in the fly will lead to an understanding of how the brain controls behaviour in other animals, including humans”, Moita concludes.

Science Snapshot: Danger in a Heartbeat
Back