The 2011 edition of the award recognises APOC’s outstanding contribution to the prevention, control and fight against onchocerciasis or River blindness, a disease which has already infected over 18 million people. This parasitic disease, found predominantly near rivers and streams, is transmitted to humans by the bite of the infected blackfly. This parasite lives in the human body producing millions of tiny larvae. These larvae migrate through the skin causing disfiguring and debilitating lesions and skin rashes. The disease is one of the main causes of avoidable blindness in sub-Saharan Africa.

For the past fifteen years, APOC has been coordinating over a hundred projects in onchocerciasis-endemic countries to control this disease. In 2010 APOC treated over 73 million people with the drug, ivermectin, thus protecting more than 120 million people at risk of contracting river blindness. APOC established a strategy of community directed treatment with ivermectin, which directly involves affected communities in administering the drug, bringing health and hope to the poorest of the poor, especially those living in the remotest and underserved regions of Africa.

APOC is a global unique public-private partnership launched in December 1995 with the goal of eliminating onchocerciasis as a disease of public health and socio-economic importance throughout Africa. Community-Directed Treatment with Ivermectin (CDTI), the main strategy used by APOC, relies on the active participation of the beneficiaries and promotes community ownership and empowerment of communities. CDTI is now increasingly being used by communities to bring other health interventions to the people who need them most. The true strength of the APOC programme is its unique partnership that comprises 20 donor countries and organizations, 15 Non Governmental Development Organizations, 19 participating African countries, the pharmaceutical company, Merck & Co. Inc. that donates ivermectin/mectizan to all who need it for as long as needed, research organisations and institutions, and 153,000 endemic communities. 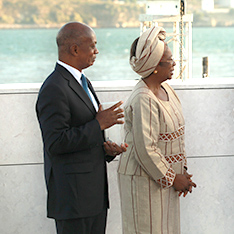