In Metamersion: Latent Spaces, we continue in our voyage to discover deep synergies between Science, Art, and Technology

Entrance is free, but registration is needed here.

The second edition of Metamersion - Metamersion: Latent Spaces - will present a programme with various events and exhibitions, offered on different dates between December 2022 and January 2023. This programme will introduce for the first time in Portugal, two installations by the artist William Forsythe, from the series “Choreographic Objects”, as well as various science-art-technology pieces, featuring collaborative interdisciplinary projects by artists and scientists. Finally, the exhibition will also showcase immersive gaming experiences, by a pioneering digital neurotherapeutics platform, allowing the audience to experience some of the current applications of digital therapeutics.

Through choreographies with a pendulum, movements that redesign a forest, virtual reality and interactive experiences capable of recovering motor and cognitive functions, the audience will activate latent spaces, allowing for the limits that separate art, science and technology, as well as the limits that divide the past, present and future, to be faded away.

PROGRAMME AT A GLANCE 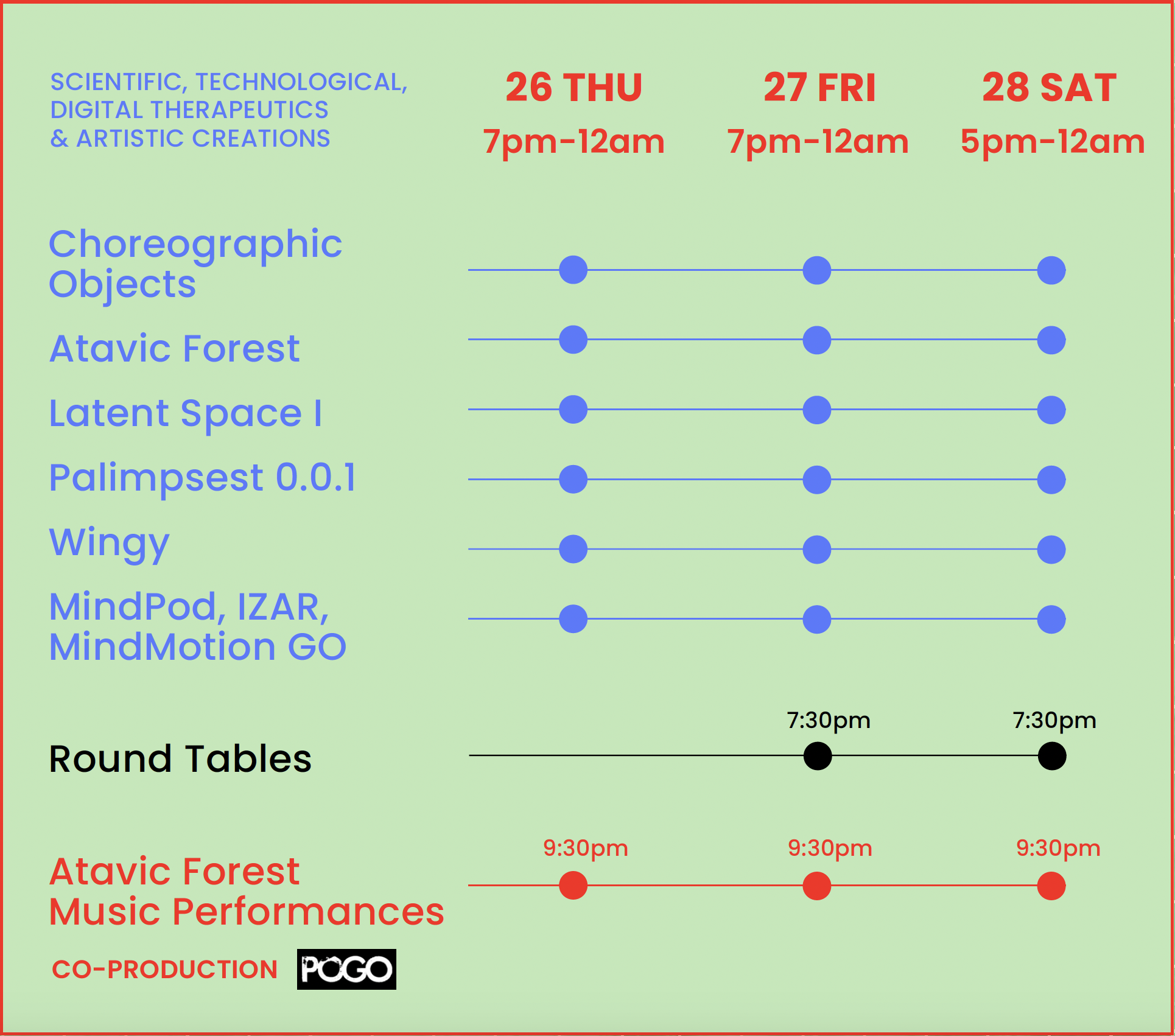 Discovery. It is a word that implies pre-existence, a latent quality - hidden and concealed, not yet developed or manifest - of that which is to be found. On the surface, it confers a solidity inherent in knowing more after than before. And yet, scratch that surface and a more complex, ephemeral view emerges. Elementary principles of nature rarely avail themselves to our senses directly and so science, that engine of discovery, based on hard evidence and reason, is in reality an extreme exercise in abstraction. Science constructs understanding through provisional models of the world, products of human creativity, valid only insofar as they are useful and reliable.

Art, on the other hand, is given more freedom, wearing its representative and creative characteristics on the sleeve. And yet, the architect Frank Lloyd Wright once said that “Art is a discovery and development of elementary principles of nature into beautiful forms suitable for human use.” Is there a better definition of science than Wright’s definition of art?

Science and art have more in common that meets the eye at first glance. It has been said that the scientific process has two motives: One is to understand the natural world, the other is to control it. Nowadays these two motives are embodied in what is referred to as fundamental and applied science, respectively. Biology and medicine are fundamental and applied forms of the science of the living, physics the fundamental counterpart to engineering. We can see a similar spectrum in art, from ideas to applications, avant-garde artistic movements to new design principles for utilitarian objects such as buildings. And yet, if one looks closely, there has always been an interplay between all of these fields. New technologies give rise to new materials and possibilities of what can be constructed, prompting the imagination and creation of new forms.

In Metamersion: Latent Spaces, we continue in our voyage to discover deep synergies between Science, Art, and Technology. In machine learning, a latent space is a compressed representation of the data that an algorithm has been trained to operate on. It is internal to the algorithm, and thus hidden from the outside world. However, it is where core functionality is embedded within AI. Imagine a model trained to translate languages: a key latent space might be semantic in nature, where the meanings of words and their combinations reside, independent of the language used to convey those meanings. In our own minds, there exist a multitude of latent spaces where the people you know, your values, your memories, your actions, might live, ready to be called upon when needed, or updated in response to new experience. Might we use technology to pull such latent spaces out into the open, where they can be seen and studied? When they have been damaged or seem to be otherwise falling short of their potential, can we research and develop methods for improving them? Given the deep connections between our minds and our overall physiology, might this provide a powerful path towards improving health and treating disease? This second Metamersion is part of a series of events tied to a larger effort at the Champalimaud Foundation to use perception and movement as both lenses and levers for research and rehabilitation.

We invite you to explore and interact with dynamic physical and digital worlds, to open yourself up to new possibilities for understanding, where the fundamental and applied, the scientific and artistic, are woven together into new materials with powerful properties for all of mankind. We envision a kind of personalised public health, empowered by science, technology and art, that takes into account the deep connection between our minds and our bodies, and the power of perception and action to bring about systemic change within those internal, latent spaces of ourselves that ultimately form the basis for health and well-being.

Parallel to his well-known stage works, the renowned choreographer William Forsythe has developed films and installations that he named Choreographic Objects.

According to Forsythe: “A choreographic object is, by nature, open to a full range of unmediated perceptual instigations without having to prioritise any type of recipient. These objects are examples of specific physical circumstances that isolate fundamental classes of motion activation and organisation. The objects instigate processes in the body that instrumentalize the body's readiness to provide input for our heuristically driven, predictive faculties, which work incessantly to secure for us a higher probability of preferred physical and mental outcomes. A principal feature of the choreographic object is that the preferred outcome is a form of knowledge production for whoever engages with it, engendering an acute awareness of the self within specific action schemata.”

In the second Metamersion two works from the Choreographic Objects series by William Forsythe will be presented:

Nowhere and everywhere at the same time

A room with metal pendulums suspended from wire rope. Viewers are invited to engage in a choreography with the inanimate objects whose movements are programmed.

The film features choreography in which two dancers combine their bodies in a knotted constellation. This slow motion physical and optical puzzle in real time, which Forsythe calls an “entanglement” is a hybrid of choreography, film, and sculpture.

William Forsythe has been active in the field of choreography for over 45 years. His work is acknowledged for reorienting the practice of ballet from its identification with classical repertoire to a dynamic 21st century art form. Forsythe's deep interest in the fundamental principles of organisation has led him to produce a wide range of projects including Installations, Films, and Web based knowledge creation.

The development and international exhibitions of Choreographic Objects by William Forsythe are made possible with the generous support of Susanne Klatten. 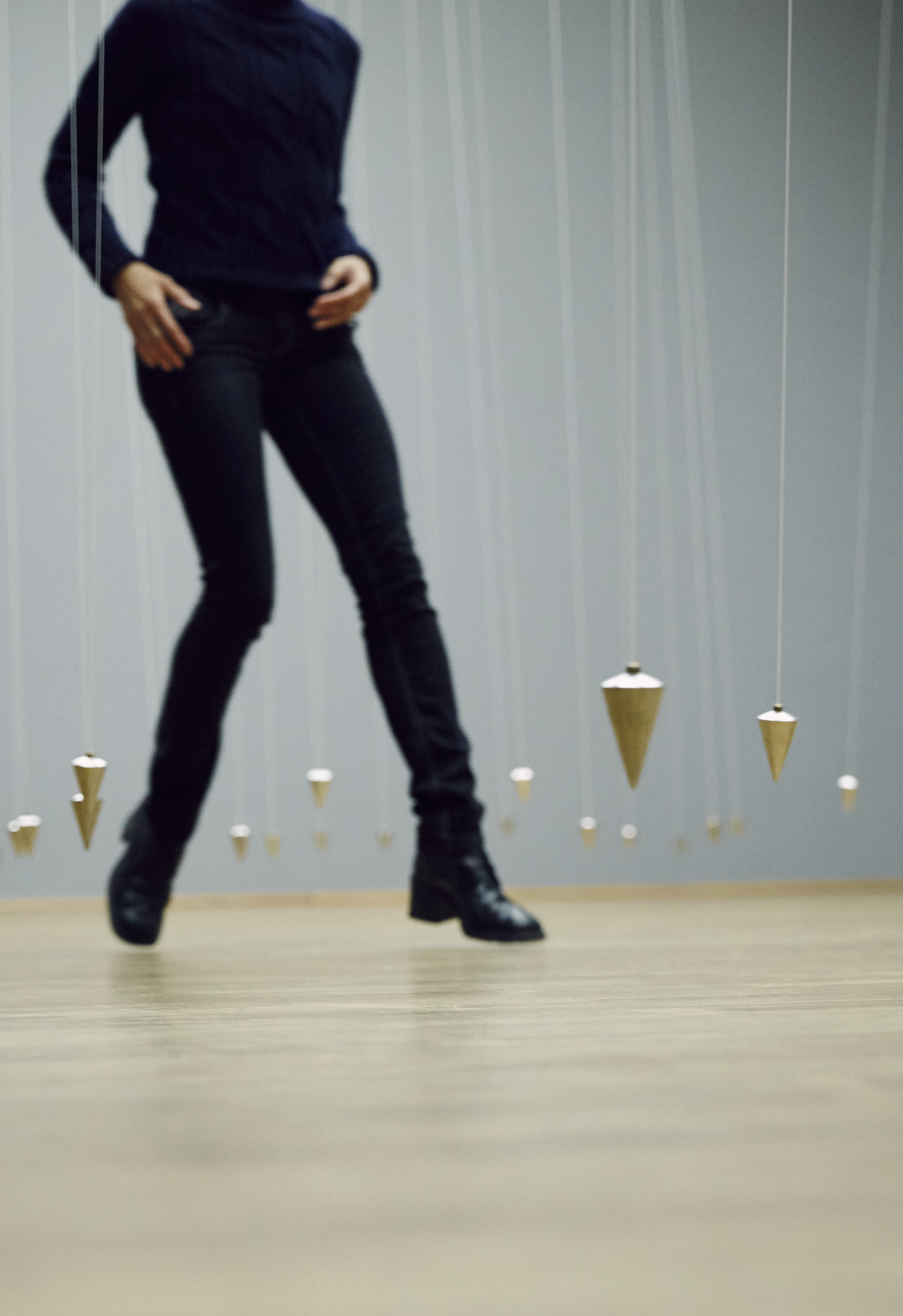 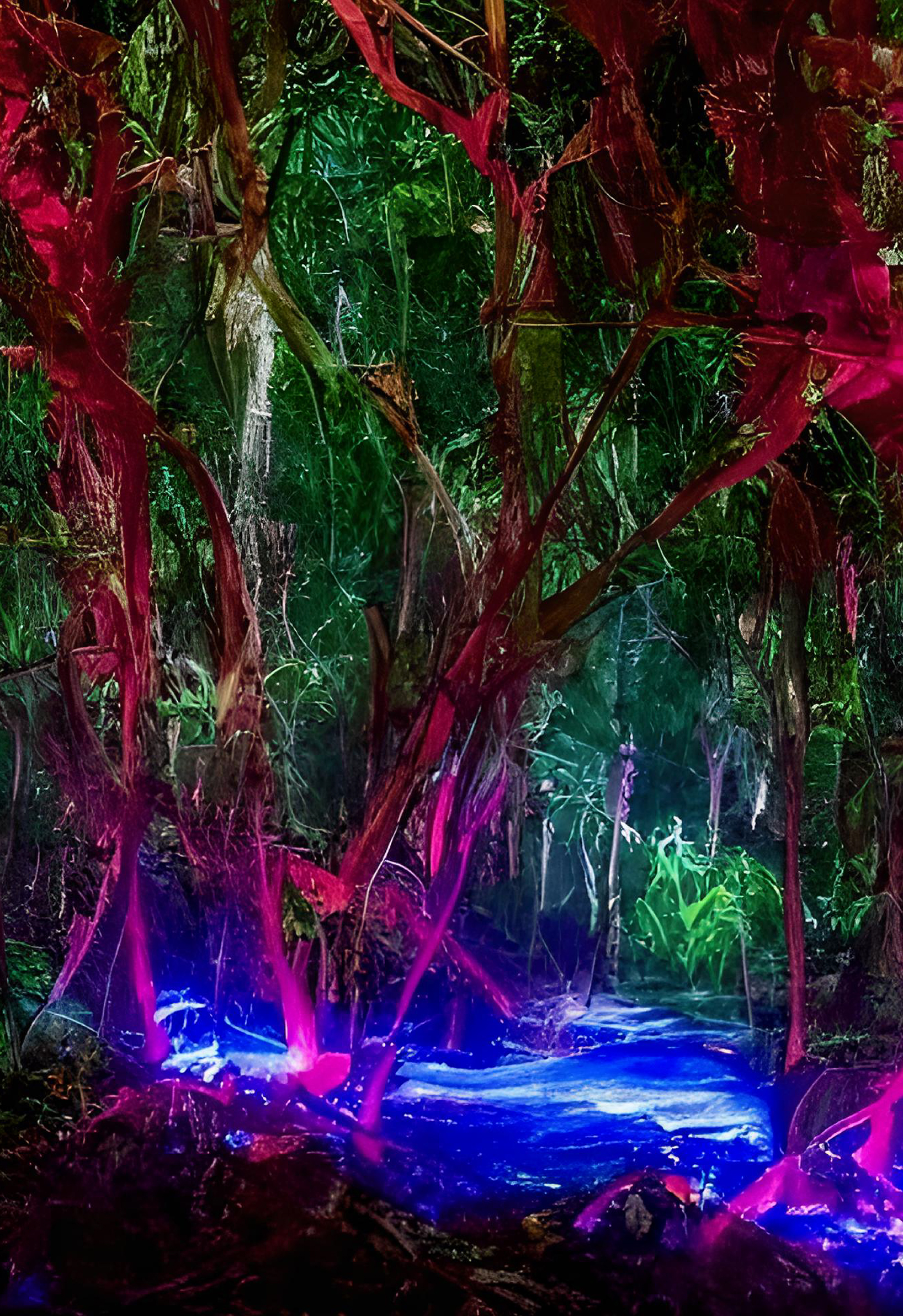 We invite the audience to experience the deep atavic memories of our species currently latent in a generative artificial intelligence. Using motion tracking, the collective experience will be steered through an ancient forest via the ongoing movement in the room, as the machine attempts to interpret and amplify what is being felt and seen.

- Lunar Ring (DE) is an art-science collective that explores new forms of creativity between humans and AI;
- Jonathan Uliel Saldanha (PT) is a sound and scenic artist, who works with pre-language, dub, crystallisation, percussion, allopoiesis, animism and echo;
- Gonçalo Guiomar (PT) is a researcher interested in understanding cybernetic and autopoietic systems by building autonomous installations that challenge the boundary between human and machine;
- Zach Mainen (US/PT) is a neuroscientist who is interested in how technology can be used to better understand, explore and enrich human experience.

Tickets available onsite, on the day of the concert. The cost will revert entirely to the artists.

A piece that combines film, installation art, and VR which explores the idea that artificial intelligence may be capable of helping people mentally heal and grow, by understanding them in ways that others can't, through a connection that is visceral, rather than obvious.

Created with the help of artificial intelligence, the short film is about a young woman who is seemingly trapped inside a dream, and she's hit by absurdity happening all around her.

A unique interactive virtual reality journey where audience members are invited to immerse themselves into an experience of discovery tailored to each participant, crafted with the latest artificial intelligence and VR technologies.

- MOTS (DE) is a filmmaker and artist duo that likes to play at the border between disciplines and genres through film, installation, and Internet art;
- Satore Studio (PT/UK) is an international, multi-disciplinary creative studio, combining design and technology to bring bold, beautiful concepts to life, delivering memorable virtual experiences from runways, stages and sets to audiences worldwide;
- Lunar Ring (DE) is an art-science collective that explores new forms of creativity between humans and AI;
- Eric Lacosse (US/PT) is a neuroscientist interested in creating technology to overcome current challenges in achieving better brain health;
- Zach Mainen (US/PT) is a neuroscientist who is interested in how technology can be used to better understand, explore and enrich human experience;
- Răzvan Șandru (RO/PT) is a researcher specialised in phenomenology and is interested in liminal experiences and the narratives that they elicit;
- Scott Rennie (IE/PT) is a neuroscientist working on creating immersive experiences focused on the exploration of human behaviour and phenomenology;
- Gonçalo Guiomar (PT) is a researcher interested in understanding cybernetic and autopoietic systems by building autonomous installations that challenge the boundary between human and machine;
- André Gonçalves (PT) is an artist, composer, founder and head developer at ADDAC System - Instruments for sonic expression. 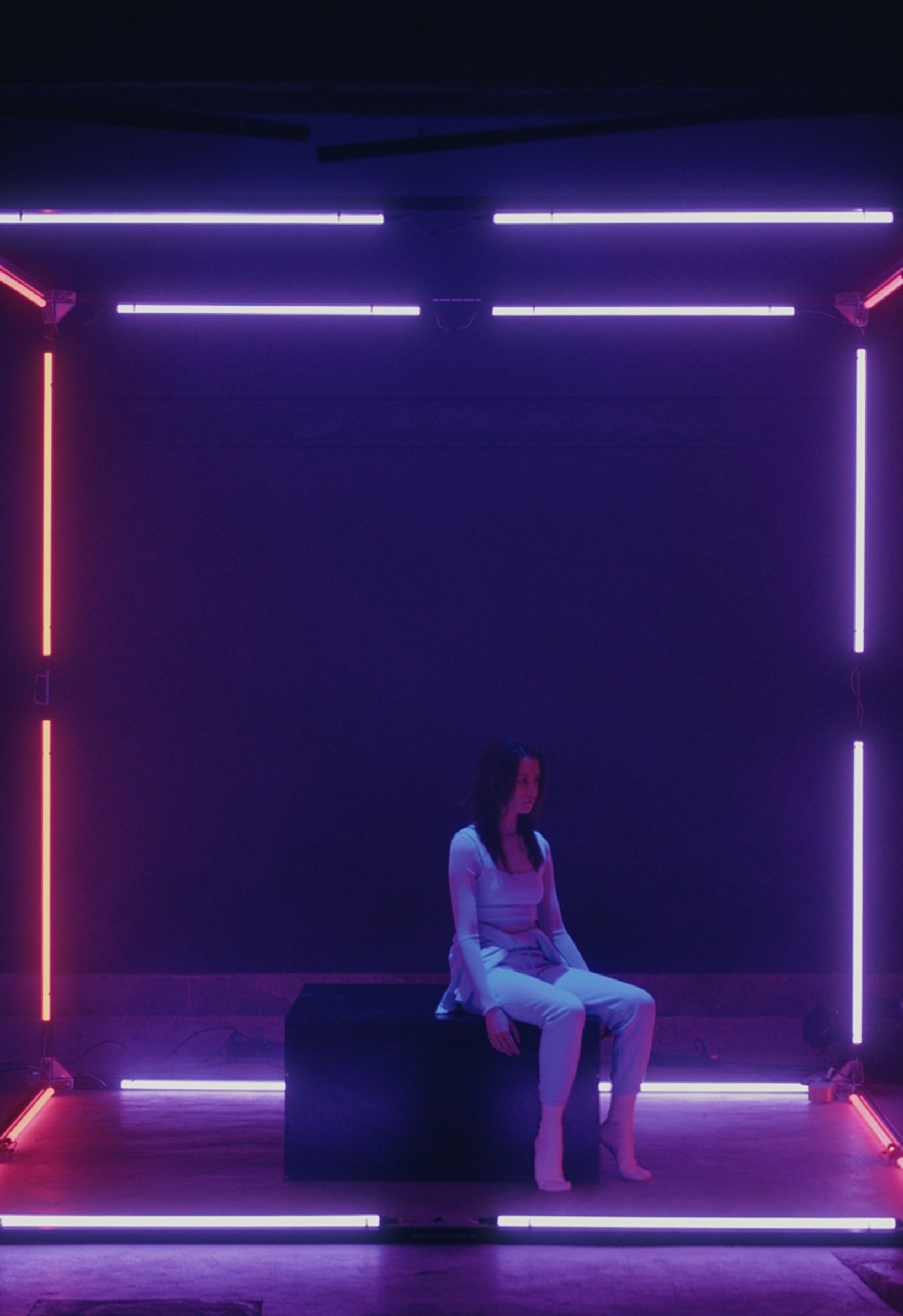 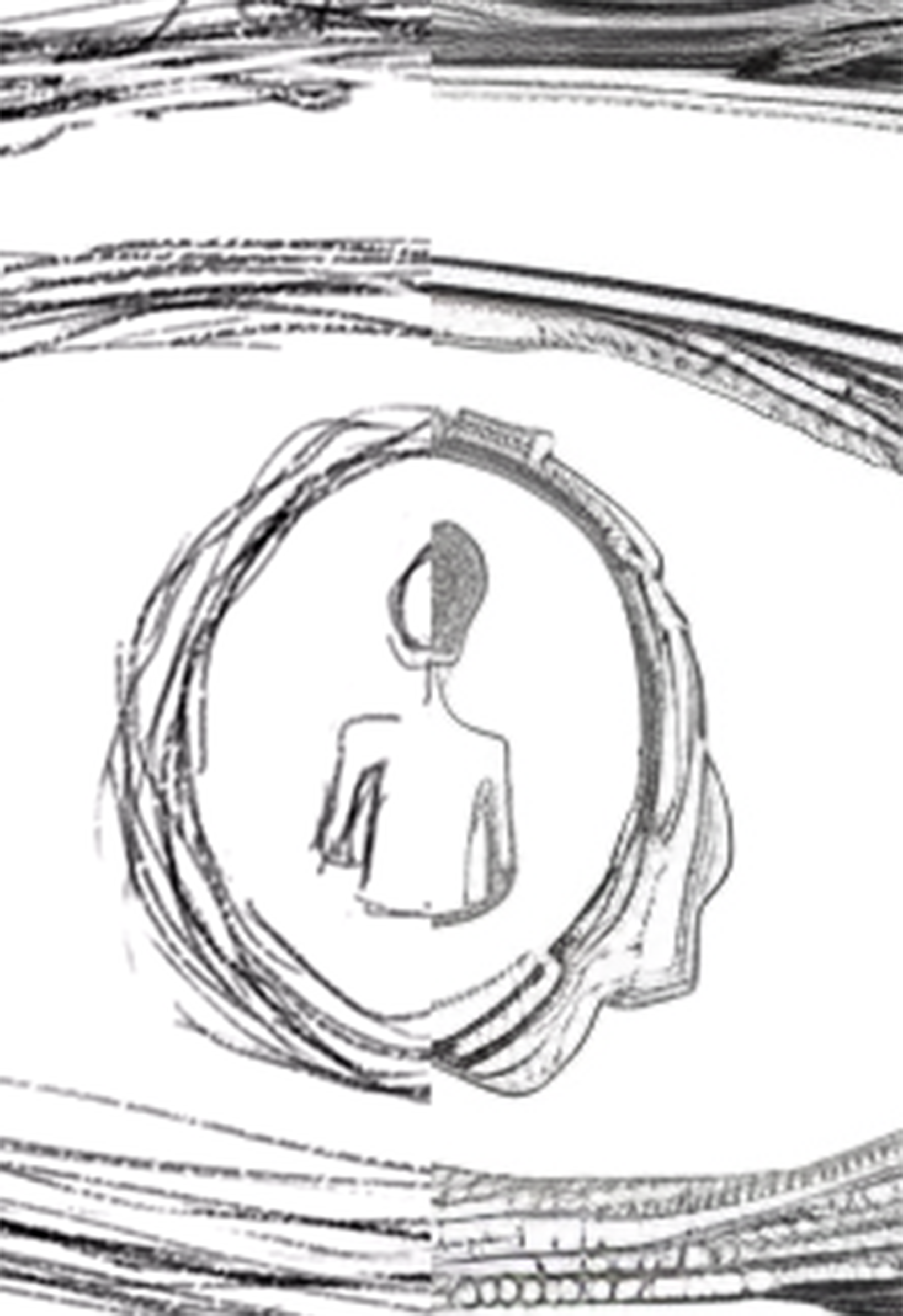 What would a synthetic intelligence capable of understanding and caring for your needs and desires, even your well-being, look like? Could it guess what you intended to communicate? Could such an intelligence enhance your creativity towards an even more lucid state? With giant recent leaps of progress in generative models for image synthesis and language understanding, we begin to see glimpses of the creative potential (and sometimes limitations) of a new generation of algorithms. This installation invites participants to a dialogue with next-generation machine intelligence carried out by exchanging images.

Wingy, the friendly winged robot is a power-efficient embedded AI robotic device capable of human interaction through image and speech recognition, voice synthesis and movement, enabled by the combination of a multitude of deep learning models. This interactive experience provides a glimpse into AI technology advancements and the potential for a wide range of health and well-being applications.

Hardware and Software Platform (PT) is a multidisciplinary team that supports cutting-edge scientific and technological innovation at Champalimaud Foundation by providing the technical expertise in the design and development of new applications across the areas of electronic, robotic, software and mechanical engineering. 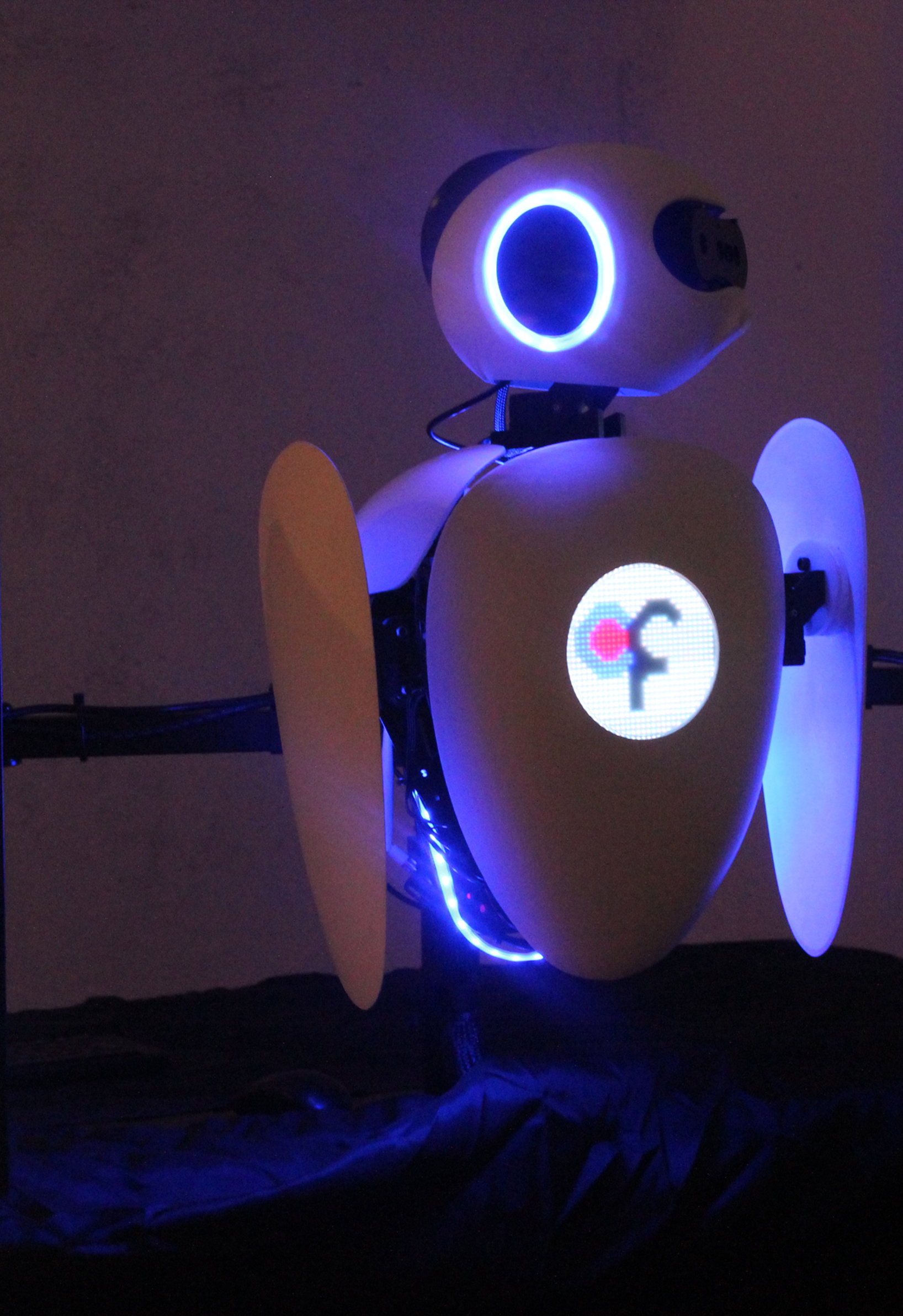 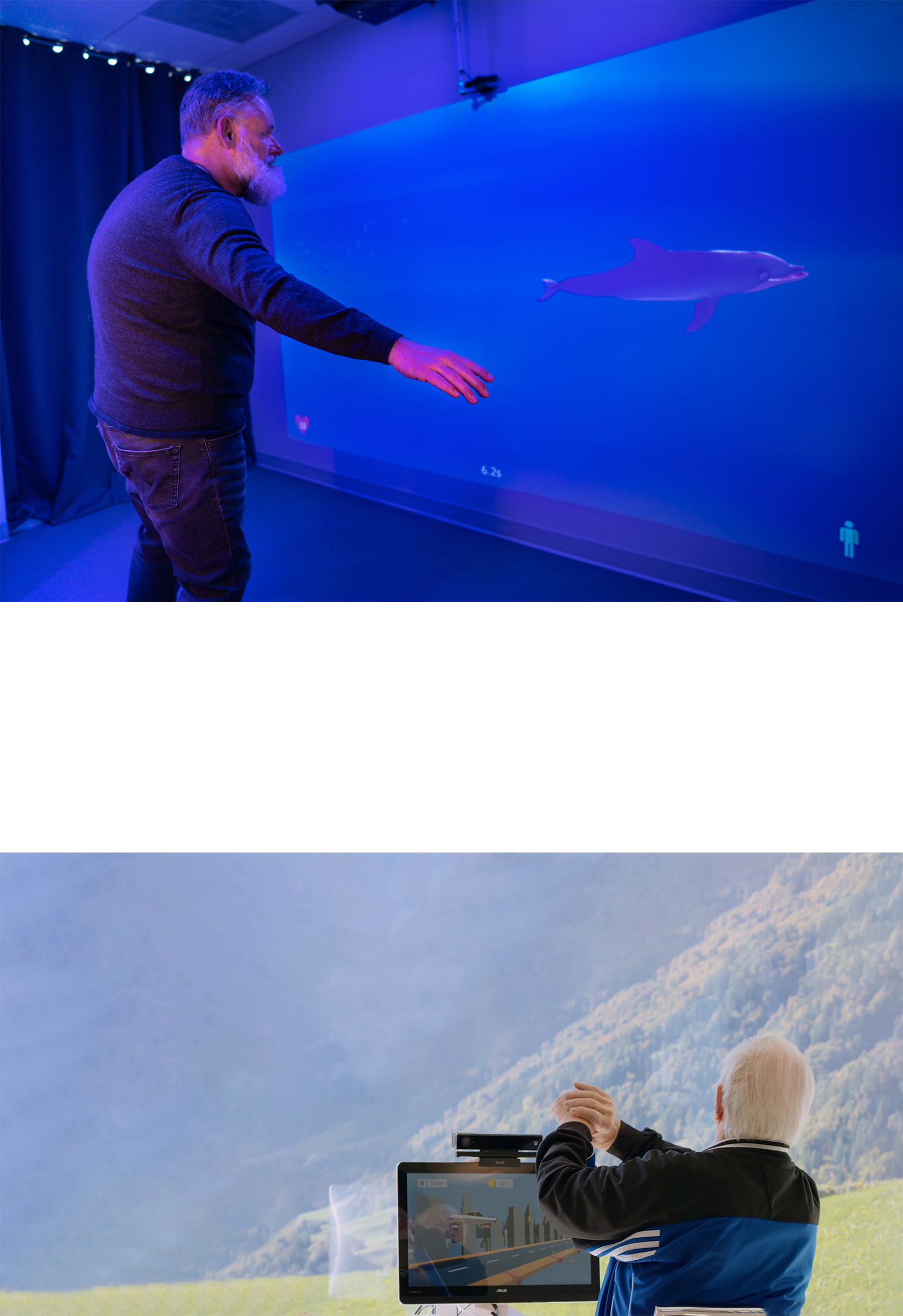 Research indicates that people with neurological injuries and diseases benefit from greatly increased doses and intensities of behavioural intervention. A highly engaging animated gaming experience – based on evidence and prescribed protocols – MindPod Dolphin is designed to promote the recovery of motor skill and cognitive function.

Created to promote the kind of movements a patient would typically practice with a physiotherapist, this game-based digital therapy is completely customisable to each individual’s needs and progress. It offers full-body motion capture through optical markerless technology, real-time feedback on the quality of movement and a hardware peripheral to train hand dexterity.

IZAR is an innovative system that is associated with MindMotionGO technology and allows you to evaluate and train wrist, hand and finger movements. Through this peripheral biofeedback system, users can train multiple components of fine motor skills, gripping, dexterity and manipulation, while involved in a virtual reality environment.

- MindMaze is a global leader in brain technology with a mission to accelerate humanity’s ability to recover, learn and adapt.
- John Krakauer is a neurologist and neuroscientist, with a range of interests from motor learning, motor control, and stroke to bioethics.