The BOUNCE Project: let’s talk about the resilience of women living with breast cancer

The European Horizon 2020 Bounce project, launched in 2017, aims to predict the psychological resilience of breast cancer patients who live with the disease. Ultimately, this should provide clinicians with a tool to tailor treatment and follow-up interventions to each breast cancer patient in order to help them get their normal lives back once they are in recovery – that is, to “bounce back”. On October 8, participants in the project held a one-day webinar, organised by the Champalimaud Foundation, to discuss the current status of this five-year project. 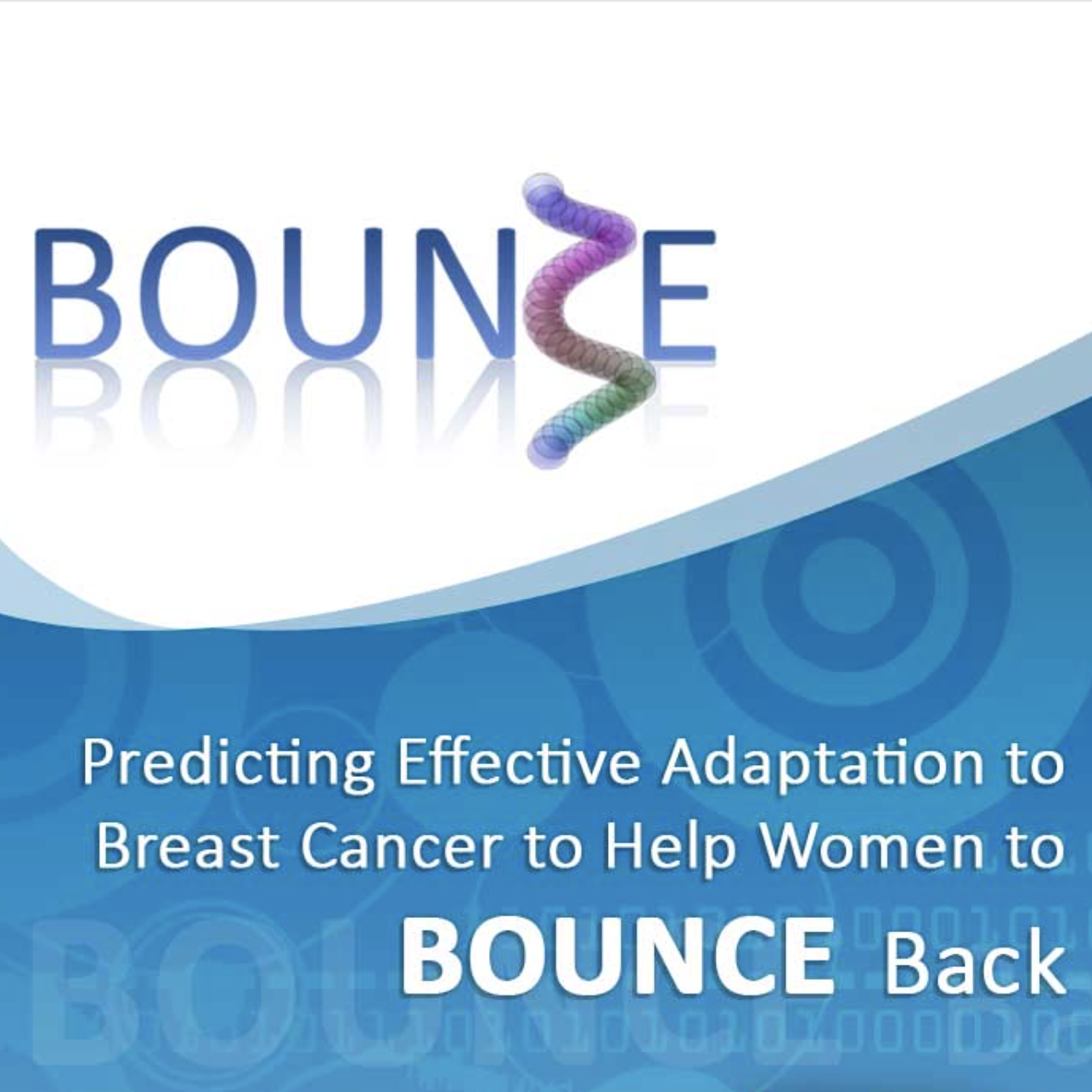 A diagnosis of breast cancer is not only an immediate life-threatening situation. It is also a psychological shock, whose repercussions can extend well past a patient’s recovery and jeopardise the leading of a normal life in the long run. However, not everyone reacts the same way to such a radical change of circumstances, which can imply invasive clinical interventions, radiotherapy and harsh chemotherapy regimens – and later strict surveillance to watch for recurrence. Faced with all this, some breast cancer patient survivors will fail to recover their normal lives, while others will perfectly cope with having to live with the disease. The keyword here is “resilience”.

What gives certain patients, but not others, the strength to successfully cope with living with breast cancer, during treatment and after recovery? It was to address this question and implement concrete solutions in the clinic that the BOUNCE research project was launched in 2017 through the Horizon 2020 Programme.
“There are no consensual definitions of resilience”, says medical oncologist Berta Sousa, from the Champalimaud Clinical Centre’s Breast Unit, who is the person in charge of the BOUNCE project in Portugal. Specifically, the definition adopted by the group of researchers involved in the BOUNCE project was introduced, in 2014, by psychiatrist Steven Southwick, from Yale University. It states that “the concept of resilience includes healthy, adaptive, or integrated positive functioning over the passage of time in the aftermath of adversity”. “Resilience”, further explains a text published on the Horizon 2020 Programme site of the European Commission, “involves complex factors such as biology, lifestyle, optimism, interpersonal connections or even spirituality”.

Unfortunately, resilience has not, up to now, been really acknowledged, in breast cancer in particular, as an issue to be scientifically investigated. “Studies do exist, [but] most of them focus on emotional distress and functional impairment resulting from diagnosis and treatment”, reads the aforementioned text.

BOUNCE is a multidisciplinary project, involving not only doctors, but also psychologists, experts in mathematical modelling and IT companies. Ultimately, it aims to provide clinics and hospitals with a computerised decision-making tool, built on a mathematical model of resilience, that will be able to predict resilience-dependent outcomes. This should help breast cancer survivors “bounce back” into their normal lives – recovering personally, emotionally, and professionally.

The model under development by the BOUNCE consortium will provide information about which combination of factors undermine coping with cancer, allowing for early identification of women at risk and the design of appropriate interventions at the right time.

To discuss the current status of the project, representatives of the countries involved – experts from Italy, Finland, Israel, Greece, and Portugal – met online last October 8 through an initiative of the Champalimaud Foundation.

Paula Poikonen-Saksela (the other medical oncologist that is coordinating the project), from Helsinki University Hospital, in Finland, explained that a clinical pilot, run in four medical centres (in Finland, Italy, Portugal and Israel) had recruited over 700 participants between November 2018 and February 2020. Biomedical, psychological and functional data was collected from these patients every three months, for 18 months, following the start of each participant’s oncological treatment. As of August 2021, some 500 patients had completed the study.

With the use of data mining tools and applied machine learning approaches on this mass of data, the scientists have started to identify the factors and processes that may predict a patient’s resilience and wellbeing along what these experts call the “care pathway”.

“We have finalised the data collection for the 500 patients”, pointed out. And they have also obtained the first results on the predictive power of the resilience model by using the patient information collected during the early phase of the illness (at starting point and three months later) to predict outcomes such as overall mental health status, depression and global quality of life nine months later (that is, 12 months after the beginning of treatment).

The preliminary results show that “the strongest features to predict these outcomes are several psychological characteristics – optimism, self-efficacy, mindfulness, coping, social support and treatment side-effects”, added Paula Poikonen-Saksela. “Medical and life-style factors are also present”, such as physical exercise, that promoted higher resilience, and systemic treatments such as chemotherapy, that had a negative impact on participant well-being.

Berta Sousa is currently working on a project on cognitive function in cancer patients. Accordingly, her intervention focused on a Champalimaud-Helsinki cognitive study being performed, as part of BOUNCE, by the Champalimaud Clinical Centre in collaboration with the Helsinki University Hospital. Based on the same patient cohort, the study aims to understand the cognitive effects of oncological treatments, also known as “chemobrain”. “Complaints by patients of cognitive impairment [such as memory problems], are a frequent complication of cancer and cancer treatment”, said Berta Sousa.

The study, which involved some 190 patients (half in Portugal and half in Finland), is still ongoing, having only preliminary results, which suggest there are no significant differences in self-reported symptoms of cognitive impairment between the chemotherapy group and the no-chemotherapy group at six months after diagnosis, with the impact of endocrine (hormone) therapy being similar to that of chemotherapy.

“This, however, needs to be confirmed with additional analysis”, cautions Berta Sousa, noting that reports from another study, named TAILORX-PROMs (patient-reported outcome measures), highlights endocrine therapy as also having an impact on subjective cognitive function in the long term, mainly in premenopausal patients, and a trend to higher vulnerability to the impact of chemotherapy in postmenopausal women. More objective studies of cognitive impairment are needed, concluded Berta Sousa, since in this and other studies, self-report measures of cognitive function are not always concordant with objective assessments, namely neuropsychological evaluation and functional MRI.

The BOUNCE project is due to end in April 2022. As stated in the project's next step goals, the remaining time will be used for improvement of the statistical models, as well as to conduct a cost-benefit analysis for the decision support module in clinical settings. Big benefits would considerably change clinical practice, enabling practitioners to provide personalised recommendations for the psychological support given to their patients.