A Journey into the Future of Neuroscience with Cats, Dogs, Octopus, Ducks and Robots

The 2021 edition of Neuronautas ended up happening in a very different format from the one in which it was originally conceived, but it still accomplished its primary objective: transform a group of high-school students into daring explorers of the unknown. 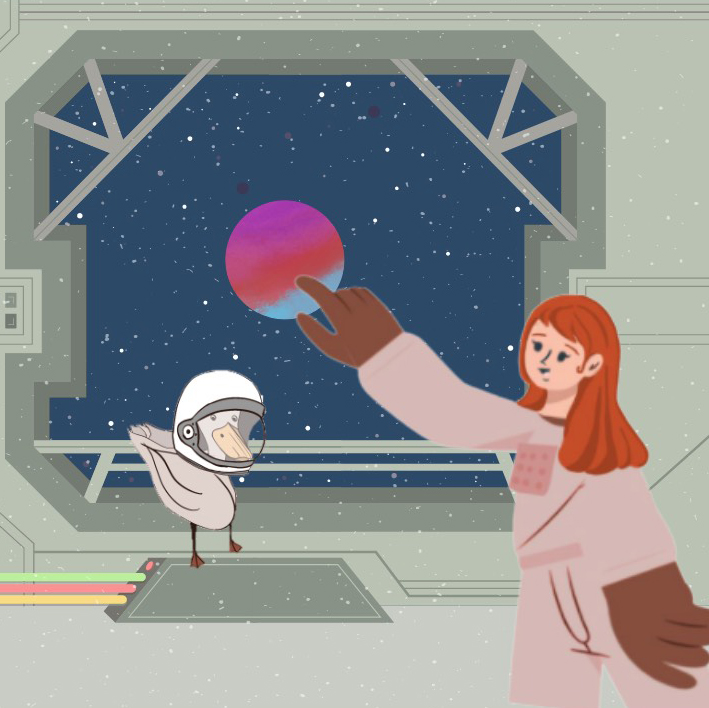 The kids appeared on the screen one square at a time. In the beginning, almost all the squares were black, excluding the ones of the teachers, who welcomed each new arrival alternating between "good morning" and "bom dia". First meetings are always a bit awkward, especially over zoom, but then, as soon as Danbee Kim, a former doctoral student at Champalimaud Foundation and one of the creators of Neuronautas, asked everyone to turn their cameras on, the screen suddenly lit up with the faces of the 2021 Class.

Neuronautas is an educational programme belonging to the Academias Gulbenkian do Conhecimento. It was launched in 2019 as a hands-on science camp at the Champalimaud Centre for the Unknown (CCU) for 10th-grade students. Unfortunately, due to the COVID-19 pandemic, the next edition couldn’t happen on-site as planned. But the Neuronautas team wouldn't give up and in a monumental effort, the teaching staff created not just one, but two independent Neuronautas journeys - the Neurocadetes’ Long Flight Course spanning four weeks, and the Chimeras' Short flight two-week adventure.

"The major challenge this year was to migrate the extensive content of the course online”, recalls João Frazão, a Software & Hardware Developer at the CCU, who was in charge of the hands-on component of the course. "We prepared a series of virtual platforms packed with theoretical study materials and practical guides. This way, the students had all the information they needed to put into action their individual explorer kits, which contained techie tools such as a robot, a camera and a mini-computer."

But just because the course was being run virtually, it didn’t mean the students were on their own. In addition to the morning and afternoon daily zoom sessions, individual students were in constant contact with the teachers, teaching assistants (TAs) and fellow Neurocadetes throughout the day. "We’ve spent a lot of time together”, says Bruno Cruz, a doctoral student at Champalimaud Research's Learning Lab, who volunteered as a TA in the course. “The best thing for me was the students' enthusiasm. After doing science for a while, you stop appreciating how exciting what we do really is. It's nice that someone from the outside reminds you why most of us chose this path in the first place."

“It was great to see the student’s enthusiasm, all groups really exceeded our expectations,” adds João. “I believe our role as TAs and monitors was to guide them, to provide the basic tools so that the students could build their ‘vessels’ and, importantly, could read ‘maps’. Students then took off and ended up exploring their own adventures. Some groups went for more ‘controlled experiences’ that ended up in incredibly thorough explorations. Others really took a risk and went ‘into the wild’, where there is more room for unpredictability and improvisation becomes an essential skill to master.”

“I always tell my students that you’ll learn so much more from failure than from success, and my own experience as a scientist affirms this”, Danbee reflects. ”But I also know that the feeling of failing can be really hard, particularly in our current society that demands constant success. There’s always a phase at the beginning of a course when students need to unlearn this previous training. They have to abandon the belief that they should only do the things they’ll succeed in; otherwise, they’ll never take the real risks that lead to innovation and discovery. This group of students also went through that phase, and they came out the other side so bold, so willing to face the unknown with patience, and optimism. I can’t put into words how proud I am of them and how happy they have made me as a teacher.”

Check out the final projects of the 2021 Neurocadetes.

The Chimera adventure was quite distinct from the Neurocadetes. Led by Danbee, the explorers spent two weeks learning about the fundamentals of neuroscience and the principles of rigorous scientific speculation, and then applied both to construct a collaboratively improvised adventure set far in the future.

“I gave the students three starting points outlining the basic assumptions of the story,” explains Danbee. “First, Chimerans are a species of space nomads who have the ability to morph; second, the Chimerans have a legend that they once had a home planet, but it was destroyed by Humans; and third, the Chimerans also have legends that speculate that Chimerans were once Humans, but somehow evolved in a different direction. Based on these  assumptions, the students created a fully-fleshed out alien society with an incredibly rich history. The students really created such a vivid story universe, I was totally blown away by their creativity, optimism, and insight into the nature of society-level behavioural dynamics.”

After creating this rich backdrop, each student also created their own Chimeran characters, and Danbee developed a table-top role-playing style adventure campaign, in which the students’ characters had to explore a newly discovered planet.

“I tried to integrate the science we’d been discussing into the plot of the story, and toss in plenty of plot twists and mysteries and red herrings to throw them off track,” Danbee recalls. “And honestly, the students were so sharp. They picked up on all the hints, and even when they got sidetracked from my intended plot, they came up with such incredible theories of how they thought it all fit together, that sometimes I just abandoned the plot that I had created in favor of the one that they made up on the spot because they were just so imaginative and able to connect dots that even I hadn’t realised I’d created and placed before them. It was really incredible.

The chronicles of their adventures, along with illustrations and videos prepared by the students, can be found on the Neuronautas website.

Feedback from the Students

"I loved the experience I had at this course. Not only did I learn new things, it opened new doors in my mind, and formed great new friendships."

"I really liked the programme and the fact that we totally created a universe, with our own rules, laws and characters. I felt that I developed my creative skills and I am very happy for this opportunity."

Testimonial from a Chimera.