Today, to celebrate International Nurses Day, we publish a short summary of the 5th Champalimaud Cancer Nurse Conference, organised by the Champalimaud Clinical Centre's oncology nursing team, which took place last week at the Champalimaud Foundation Auditorium. A double celebration, in a most anticipated return. 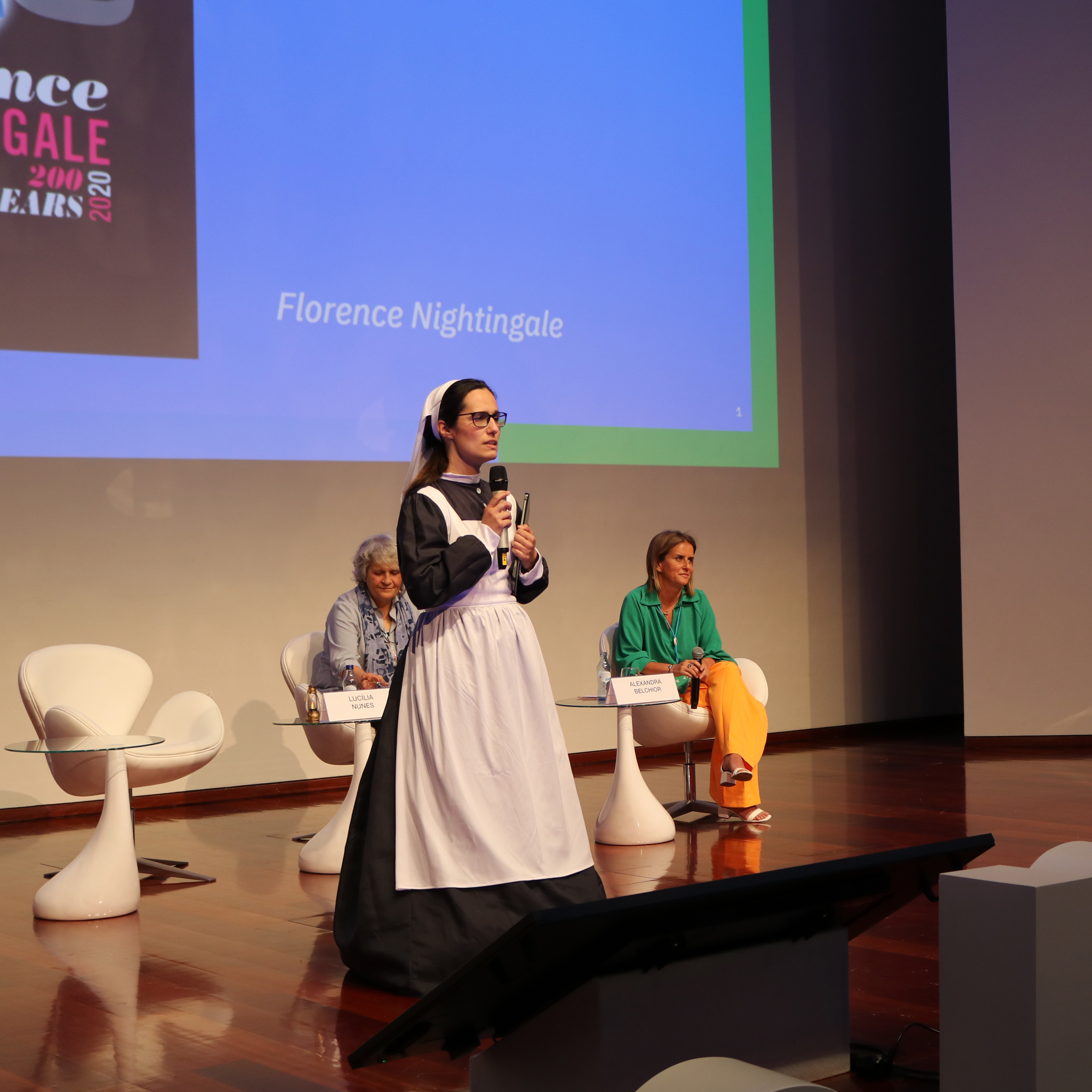 The event should have taken place in 2020, marking the WHO’s International Nursing Day by commemorating the bicentenary of the birth (on 12 May 2020) of Florence Nightingale, the “mother of all nurses”. But, due to the COVID-19 pandemic, nurses around the world were suddenly called to attend to much more urgent matters in their collective role as the pillar of healthcare.

Last May 4, in Lisbon, the 5th Champalimaud Cancer Nurse Conference took place under the motto “Florence Nightingale in the Digital Era: ‘Where do we stand and where do we go from here?’” From the history of nursing to the advent of new technologies, from the modern evolution of nursing to the new need for learning and specialisation, the Auditorium of the Champalimaud Foundation was the stage for a series of talks and round-tables focused mainly on cancer nursing, mas that also encompassed the nursing profession as a whole.

Florence Nightingale – who, during her mission in a Turkish hospital in the 1850’s, at the time of the Crimean War, became known as the “Lady with the Lamp” due to her habit of carrying an oil lamp to make nocturnal rounds in the wards of the British Army’s wounded soldiers – would have been certainly surprised (or maybe not?) had she seen the evolution, during the last decades, in Portugal and around the world, of the profession she created.

One of the advances that would probably have pleased her the most would be the growing importance given today to science in nursing, as she herself was a skilled scientist, a pioneer in the field of statistics, beside having managerial and leadership skills.

And indeed, one of the most frequently mentioned aspects during the Conference was the need for nurses to increasingly participate in research and decision making in health, including at the level of public policy, on equal terms with physicians and politicians. This process is already ongoing: there is an increasing number of nurses who have masters and even doctorate degrees in nursing, but it is far from being generalised. “We work inside silos, we have territories”, noted former Portuguese Minister of Health Adalberto Campos Fernandes during his intervention. “Everybody talks about integration, but nobody likes the idea.”

The question of reviewing nurses’ roles, and in particular of their  possibility to perform certain medical acts, was also broached. This is still not done in Portugal, but is already a reality in the United States, where there are many qualified “nurse practitioners” – as referred during a Zoom session, live from the US, by Virginia Ferreira, a Portuguese-American acute care nurse practitioner working at the Memorial Sloan-Kettering Cancer Center in New York.

Nevertheless, people in power are not the only ones responsible for the current fragmentation of functions in health. Many of the participants also talked about the lack of self-assertiveness and professional valorisation of their own work on the part of nurses themselves. Even though they are “pivotal for health care”, as attested by several nurses who were interviewed for a short video that was shown during the conference. Another interviewed nurse stressed the fact that nurses need to recognise their own value, while yet another added: “Never say ‘I’m just a nurse’.” The relative lack of self-assertiveness is a very real problem.

New technologies could not have been excluded from the debate. Some participants feared that they would eventually diminish the human side of nursing, but most agreed that the advantages that Artificial Intelligence and the automation of procedures can offer are undeniable. “It’s not because they exist that we look less at the patients”, said disse Jacques Santos, a specialist of internal medicine at Santa Maria Hospital in Lisbon, who participated in one of the roundtables both as a physician and a cancer patient. “It’s possible to improve monitoring and follow-up thanks to new technologies”.

An example is “digital nursing”, which allows sending questionnaires to patients so they can remotely self-report their state, making it possible to detect potentially serious incidents, “improves the patients’ physiological and psychological and their quality of life”, said Marta Martinho, a nurse at the Champalimaud Foundation’s Breast Unit. “Digital nursing is the lamp that brings patients and nurses closer, every nurse can be an e-nurse”, she added. She also announced that the digital nursing system should start being applied at the end of the month in the Breast Unit.

It’s not tomorrow that a robot will hold the hand of a patient in distress. It will always be a human being, most likely a nurse. A moving example of the human side of nursing was the intervention of Helena Lagartinho, coordinating nurse of the Extramural Care Platform of the Champalimaud Clinical Center, which exists since 2017 – and that makes it possible to literally  take the hospital into a patient’s home, which is something that requires extreme dedication on the part of the involved team – and, by the way, also a good dose of new technologies.

Patrícia Cortez, coordinating nurse of the Committee for the Control of Hospital Infections of the Champalimaud Foundation, spoke about “Smart Infection Control”, which is essentially a project of new technology-assisted hand sanitisation. Florence Nightingale, who understood of hygiene in the hospital environment, would doubtless have been glad to know that, 200 hundred years later, something as simple as washing and sanitising your hands still is the best, and maybe the only efficient barrier against contact infections – as has been proved, once more, during the COVID-19 pandemic.

The last talk of the day was by Lucília Nunes, who holds a Master in Nursing Sciences, a Phd in Philosophy, and coordinates the Nursing Department of the Escola Superior de Saúde in Setúbal, among other things. She talked about the need to use technology to “rethink the lifelong training of nurses and to close the gap between the workplace and the place of learning”, adding that “the nurse of the future is the nurse of today with a very strong scientific and ethical component”.

At the very last minutes of the Conference, a surprise guest arrived: the “mother of all nurses” herself, impersonated by Fernanda Conceição, nurse in charge of the Intensive Care and Recovery area of the Champalimaud Foundation. Dressed as a 19th century nurse, with an oil lamp in one hand and a tablet in the other, this modern “Florence Nightingale” ended the event by commenting on a series of slides displaying remarkable Florence Nightingale quotes. 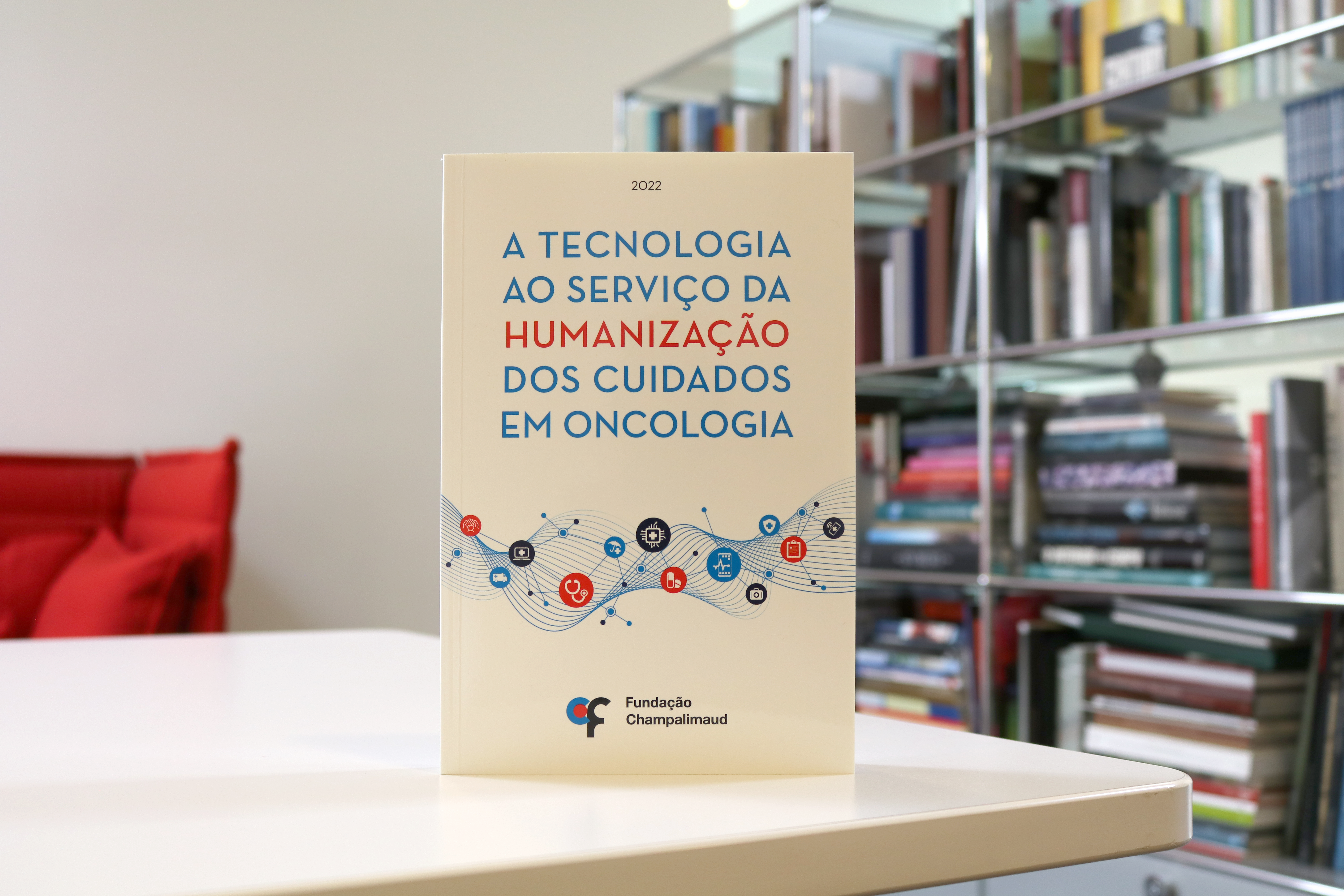 5th Champalimaud Cancer Nurse Conference took place under the motto “Florence Nightingale in the Digital Era: ‘Where do we stand and where do we go from here?’”
Back