If you think you’re not even a tiny bit racist... think again

There has been a lot of talk in the media about Portugal and the Portuguese not being racist as a society or as individuals. The latest Ar Event from the Champalimaud Foundation, which took place on the 17th of June, radically debunks this comforting thought by showing that none of us is immune to a completely unconscious phenomenon called “implicit bias”. As far as racism is concerned, implicit bias can make us all more or less racist. The question is to find social strategies to overcome it – at the earliest possible stages of life, before it becomes a conditioned behavior. 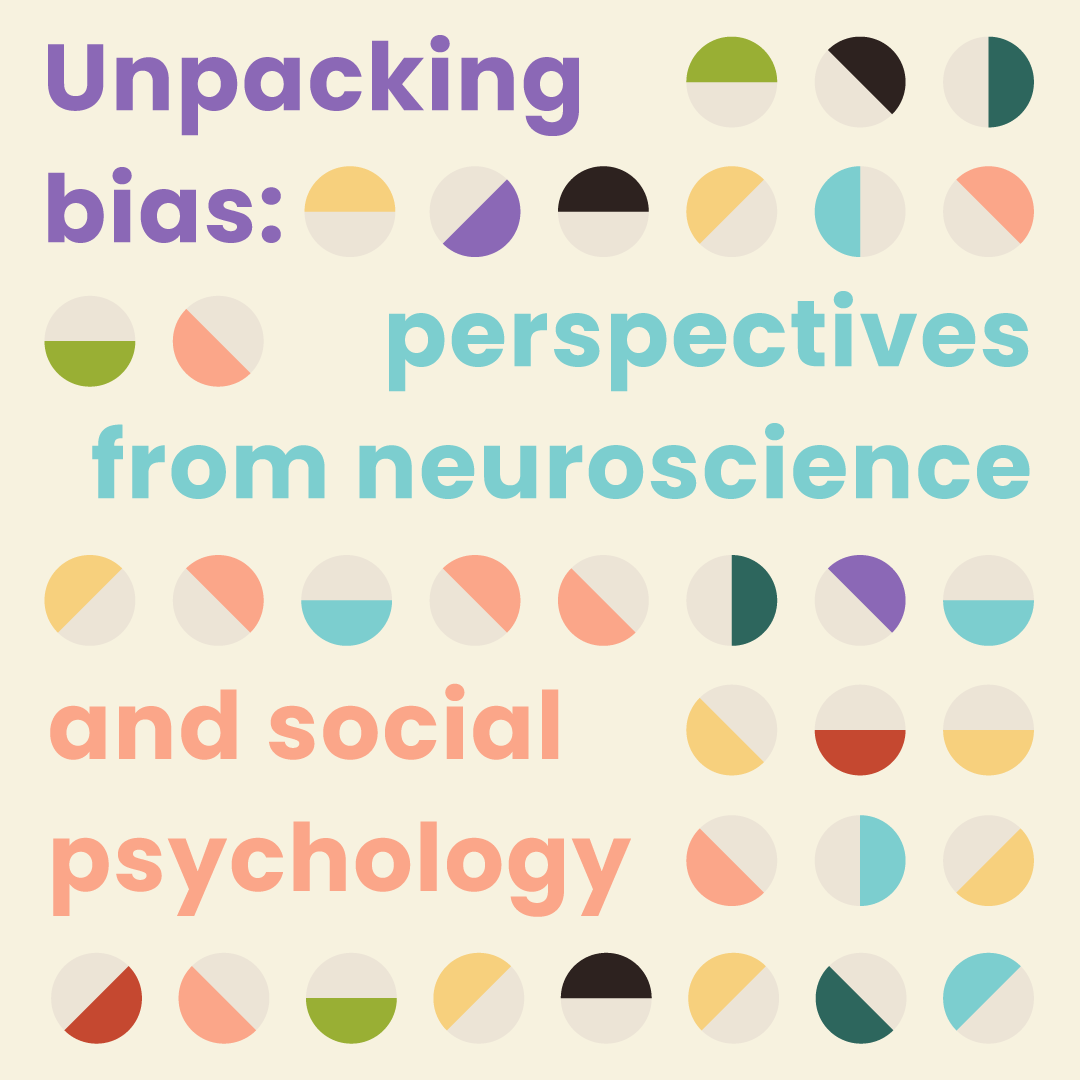 People are not born racist. But as children grow up, their brains, which are association-generating machines, detect and unconsciously learn, through social interactions, to associate different groups of people to different attributes, which can be positive, neutral – or negative. And when these attributes concern ethnic minorities, negative associations give rise to racial stereotypes and racism.

“Sometimes [during the association process] our brains take erroneous shortcuts that can become harmful”, explained Megan Carey, who is the Principal Investigator of the Neural Circuits and Behaviour Lab at Champalimaud Research (CR), during the online event “Unpacking bias: perspectives from neuroscience and social psychology” that took place online, on June 17th, as part of the “Ar Events” outreach initiative.

The first invited speaker of the evening – Social Developmental Psychologist Ricardo Rodrigues, from ISCTE/University Institute of Lisbon – all but demolished the popular notion that school-age children are less racially biased and prejudiced than older people.

Describing studies he performed at his lab with white children aged four to ten, he came to the surprising (for the audience) conclusion that not only are children “aware of social categories by age four”, but that soon after they acquire group identity and preference, they learn group stereotypes by age six-seven.

When in public, continued Ricardo Rodrigues, while five to seven-year-olds “boost their expression of racial bias”, older children (eight to ten) have already learned how to hide it and conform to the socially expected anti-racist norm… except when they think no one is watching. In fact, children reach their highest lifelong racial prejudice level by the time they are seven-eight years old! So much for popular wisdom…

“What are the origins of racial bias in children?”, asked Ricardo Rodrigues. There are three main answers: “parenting, teaching and the biased structure of our societies”. Again, it is true that children are not born racist. We just teach them to become racist at an early age.

Are there ways to tackle this? Can they unlearn racism? “School and community desegregation, positive intergroup contact, anti-racist school curriculum, open discussion about racism explicitly included in the school curriculum” enumerates Ricardo Rodrigues, “are the answers.”

We may not even know we’re racially biased

Except that a big hurdle emerges here: it so happens that, although racial bias can be learned explicitly, it can also be learned unconsciously. In other words, parenting, teaching and the biased structure of our societies also give rise to what are called “implicit biases”, of which humans are almost totally unaware. And, because of that, implicit biases may be more difficult to unlearn than explicit ones.

But this doesn’t necessarily mean they are impossible to unroot. As Master of Ceremonies (MC) Jovin Jacobs, a Neuroscience PhD student in Megan Carey’s lab, said during the presentation of the Ar event, the first step to any solution is to recognise the problem in ourselves.

What about later in life? What becomes of our implicit biases as adults? Do we think of ourselves as being even a tiny bit racist or do we vehemently reject the mere idea? Are we gender-biased? Sexual orientation-biased? Are we biased in ways we don’t even realize? To learn more about our implicit biases, we can, for instance, take the IAT (Implicit Association Test), available at Harvard University’s Project Implicit site.

In a nutshell, the IAT, which relies on a comparison of response times in different tasks pairing concepts and attributes, is supposed to reveal unconscious, or implicit, mental associations. The validity of the test has been controversial in terms of its predictive power of people’s actual behaviour, and the ethical implications of self-interpretation are questionable, but the results might still shake profound beliefs about ourselves.

The expression “implicit bias” was coined in 1995 by American social psychologists Mahzarin Banaji and Anthony Greenwald, who argued that social behaviour is largely influenced by unconscious associations and judgments. And although the IAT itself has well-known limitations, researchers mostly agree that implicit bias is a very real thing. “There is a mountain of evidence—independent of any single test—that implicit bias is real,” wrote Keith Payne, a professor in psychology and neuroscience at the University of North Carolina at Chapel Hill, and colleagues, in March 2018, in Scientific American.

It was by using as an example a specific motor-learning process that Megan Carey, the second invited speaker of this Ar event, chose to illustrate the power of unconscious learning processes in the brain.

The experiment consists of literally showing the world to participants (in this case, student volunteers) through a distorted lens and asking them to aim a ball at a target. After the subjects briefly practice hitting the target (which they easily do), they are fitted with special prismatic goggles that shift the physical world they see to the left.

This initially makes them miss the target by aiming too far to the left, but after just a few minutes they gradually learn to adjust their throws so that they're on target again. During the third part of the experiment, the goggles are removed and – lo and behold! – the subjects start missing the target again! This time, though, their errors are in the opposite direction, and their throws land too far to the right. Once more, after a number of trials, they go back to hitting the target. And surprisingly, it takes them just as long to learn to gradually return to the target as it did when they were wearing the goggles, despite a lifetime of experience of normal throwing. “This form of learning is powerful and almost completely unconscious”, said Megan Carey. “The brain is constantly updating our model of the world”.

The question is, could we counter this implicit process with explicit strategies? Imagine, Megan Carey continued, that once the subjects have their goggles on, you give them an explicit compensation strategy by telling them that the goggles are shifting everything to the left by a certain amount, and that to hit the target they should aim their throw that same amount to the right. “If the subjects follow your instructions correctly, they will hit the target on the first throw, making no errors”. So it seems to work.

But then, something unexpected happens: if the subjects continue throwing the ball, their hits then start to gradually deviate away from the target! This finding was first reported by John Krakauer, from Johns Hopkins University, and his colleagues, using a task with a cursor on a computer. “We adapted it to goggles”, said Megan Carey.

“What’s happening here”, she explained, “is that, unbeknownst to them, their brain is actually trying to resolve the conflict between what it sees and the movement the subjects’ arm is making when throwing the ball. And the subjects cannot stop this implicit learning from driving their movement away from the target. This implicit learning is very powerful and overrides explicit strategies” to counter it, Megan Carey concluded.

While emphasising that she was “not fully comfortable extrapolating these results to bias”, she nonetheless found the comparison with implicit cognitive bias valid to the extent that, in many instances of real-life as well, “we view the world through distorted lenses and are unaware of the errors this forces us to make”. The good news, however, is that, according to her, “once we become aware of the mistakes they cause, we can eventually learn to overcome our implicit assumptions.” But, she emphasised, that awareness is an essential first step.

So how could it be done? During the last part of the evening, the invited speakers were joined online by Iolanda Évora, a Portuguese and Cape-Verdean Social Psychologist at the University of Lisbon, and Joana Sá, a Physical Engineer at Instituto Superior Técnico, to discuss the subject and answer questions from the audience.

The thing is, the panelists agreed, even in a relatively progressionist country such as Portugal, racism is embedded in society.
“We have to unlearn bias in the brain and as a society, and the social bias is harder to overcome”, noted Megan Carey.

It was thought at one point that AI could help unbias the world, by applying “objective criteria” to decision making. But, as Joana Sá noted, the AI algorithms turned out to be as biased as the human data used for training them. “Algorithms eliminate outliers and socially that means minorities. An AI system will tell you that a CEO is always a white male”, she pointed out about algorithms used by companies to select potential candidates for a job. But turning the problem around, suggested Joana Sá, AI algorithms “could be a great tool to identify structural biases humans have”, by finding patterns in our past actions. The issue now is deciding who sets the new rules – and, while the "fix" may be simple (introducing a line of code), the power to decide how an algorithm is shifted should not fall into the hands of coders alone.

One practical way to try to unbias society, emphasised Ricardo Rodrigues, would be “to expose children to diversity very early and, of course, try to use less biased narratives in the teaching of Portuguese History, for example”.

But this would not be enough by far, countered Iolanda Évora, because the problem of racial bias runs much deeper: in school, the racial issue is not experienced in the same way by a black or Roma child when compared to a white child. “White children are not racialised [that is, being white is not an issue for them, since they are the norm]”, she said, “while black and Roma children are. For black and Roma children, school constitutes their first experience of ‘ego crushing'.”

Ricardo Rodrigues agreed: contrary to white children, Roma and black children “spend their time managing their stigmatised identities and feeling they have a lesser value.” And the fact that teachers are mostly white does not often help these children to increase their odds of acquiring a positive outlook.

MC Jovin Jacobs wrapped up the meeting by expressing some hope for the future with a dose of humor: he wished that we manage to unbias the world, so that one of the most visible roles he assumed in this event, that of “the token black guy”, would become obsolete.

Unpacking bias: perspectives from neuroscience and social psychology
Back